There is not one Taylor Swift song I don’t like. 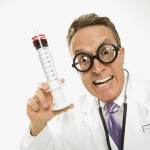 I have a ridiculously irrational fear of doctors. I haven’t been in years now and I’ve never had my girly exam done. Bad, I know. I’m a pretty big fear-facer and this one is actually a pretty important one. (as opposed to jumping off of cliffs and reading my poetry on stage to random strangers)  Still,I keep putting it off. There’s a couple of reasons for this. I hate getting my blood drawn as I’ve passed out the last two times this has happened. I tried facing this fear by attempting to donate blood last year but passed out after the finger prick. I’m also terrified of being diagnosed with something I don’t want. My aunt has a severe form of scoliosis that she never had surgery to correct. As a kid, I had this warped image in my head that this is what the condition always looked like. So it scared me when the doctors would always take extra time to check my back for signs of the same. My mom was just told recently she has a more mild form of scoliosis as well. I know this means there’s a good chance I might too. I also know that I’m now better equipped with correct knowledge to handle it if I was diagnosed…but walking into doctor’s offices just bring back lots of unwanted feelings/memories. Sigh. I really do need to get my girly parts checked. 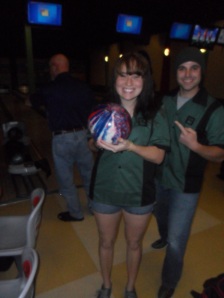 I don’t really regret much but there are some things I feel bad about in the recent previous years. One of these things being the way I treated boys pre-Robby. Shortly before and after my first heartbreak, I think I got it subconsciously in my head that if a dude could hurt me, then I could hurt dudes right back. I strung two, okay maybe three, guys along in this short time frame. Would ignore and then text them when I was bored. Would get them to tell me their feelings for me when I knew I didn’t feel the same. Would kiss them and go on nice dates knowing nothing would ever come of it.  Simply put, I was acting like a guy. When my husband came along, I hadn’t really changed my plans. I had little feelings for him when he started telling me in his southern drawl, “I really like you.” It came as a shock to my system when a few weeks after meeting him, he told me he loved me. Well,crap. I think I realized around this time that what I was doing, no matter how victorious it felt, was very wrong. And I gave the dude a chance. Didn’t turn out to be such a bad idea.

I occasionally like to annoy people by singing random Barney songs. A couple of days ago at work it was, for my coworkers, “I like to eat eat eat apples and bananas; I like to oat oat oat ooples and boonoonoooes; I like to iit iit iit iiples and biniiniiiiis.” I think it’s probably good that I’m going to be a nanny this summer.

I really don’t want to turn 22. Not at all. People roll their eyes at me when I tell them this, but seriously. As fast as 21 is going by, I can only imagine how fast 22 will. Then 23..24…25…,.Before I know it, 76. Husband and I will be hitting each other with canes in a nursing home in no time. And we will not be the cute Notebook-esque couple. I have this planned out. We will be the couple yelling obscenities at the other from across the room who at night keep the other elderly up by getting some nookie. Hee. I said nookie.

I’m really bad at remembering names. Really bad. See if you can find proof of this below: 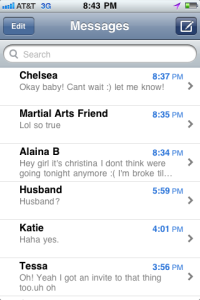 I’m kind of mean to my husband. I like to tease him maybe a little too much. He is just so mushy sometimes, and in order not to blush, I must make fun. The other day I was commenting on the box of chocolates he got me for V-day. It was a really good box of chocolates. He knew this and told me:

“Well of course it was good! You’re not just some girlfriend…You’re the future mother of my child!”

First of all, I don’t know whether to like this statement or not. I think it means I was getting cheap chocolate when we were dating. Secondly, The future mother of my child!? Really?! So I innocently told him he would make a good gay guy. I meant it as a compliment. He’s very in tune with his emotions. My husband didn’t like my compliment. Psh.

I’m really good at pushing people’s buttons. I’ve kind of calmed down a little bit on this as I’ve grown up, (as a kid I’d almost purposely get grounded just to see my parents about ready to go into an insane asylum) but every once in a while I still enjoy a good game of keeping others guessing/ driving them crazy.  I can’t help it. I love knowing what makes people tick. Or explode.

As a young teenager, I suffered on and off with OCD. I was never medicated and have learned how to control it much better by now, but there’s still some things I do that are pretty crazy. One of these things being that I occasionally have to do things in sets of three. So Robby doesn’t die. My dude thinks this is hilarious and now joins in. For example, sometimes when my boy kisses me he’ll make sure to do it three times and then playfully smile and say,“Sets of three!” It actually makes it better that he’s made it into a game. The fact that I’m crazy doesn’t scare him off. It amuses him.

I’m starting to become more comfortable with my decent-sized boobs. I don’t think they’re too big anymore. B is a nice size for me. The other day I stared at them in the mirror with approval. They are actually very nice boobies. Though I did notice that my right is slightly bigger than my left.

42 thoughts on “Confessions of a 21 year old with a slight crazy bone.”