As I’m sure most of you know, Texas lost last night.  However, it was still a pretty damn good night, for the following reasons:

1. One of the best friends tagged along to the party with me.

2. Lots of food.  I think my favorite was the meatloaf cake.Yes, you heard me right.  It looks like a cake, and tastes like meatloaf. I was in awe.  I think I told the dude who was awesome enough to cook this how amazing it was about a thousand times. Looked a little something like this, but with bacon instead of ketchup (I liked the substitute,not a big ketchup fan.) 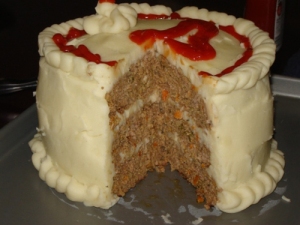 3. Leading me to this….Have any of you ever heard of This is why you’re fat.com? This is where the ‘cake’ maker got the recipe and told me I needed to go check it out. He and a couple others were surprised I’d never heard of it before and mentioned something along the lines of two donuts being used as hamburger buns….WHAT!? I had to see.After seeing this amazing food-filled web site, I’m an instant fan. Go look, go look!

4. Betting with shots. Brittany and I held strong on the bet that if Texas got another touchdown, meatloaf guy takes another shot. It definitely happened. He had his first ever shot of jager. I took one with him but couldn’t finish mine. Ick. I got made fun of a few times by different people for nursing all of my shots that night.  My gag reflex sucks, okay!?

5. Marriage talk! I don’t get to talk about marriage with girls really, ever. No friends of mine or anyone my age is married and my older friends that are married got married years and years ago. There was a lovely couple there that got married the same day as Robby and I. We talked honeymoons,house-buying, and the fact that everyone and our mothers want to know when we’re popping a baby out. (hint, NOT anytime soon,dammit.)  It was nice to have someone to relate and laugh with marriage-wise for a few hours.

6. New people. I love people, I love anything new, I especially love instantly hitting it off with new people. I met a lot of adorable new people last night and was a little surprised how sweet they all were. Brittany and Deesh were the hosts and they’re still fairly new to me too.  You know when you can tell right off the bat that people are just…genuinely good? I get that vibe with them both.  Not to mention they’re a lot of fun and can host a really good shin-dig. Brittany also introduced me to Amaretto. I didn’t even know that was alcohol, I thought it was a lovely smell/yummy coffee flavoring.Well,It’s freaking good. Or, it was until the two of us stupidly decided to mix Everclear with it. Not such a good idea. It is a good idea (courtesy Deesh) to have a board game night soon though.  I made my Apples to Apples love affair known.

7.Yeah so, the game kind of sucked. But drinks were pouring, My best friend joined me, The company was lovely; Lots of high-fives and shot-taking and laughs.  Oh, and meatloaf cakes. So I say lose or not, the night was a success. One of the reasons I love football so much? It’s about the company just as much as it is the game. I call win on that part of the night at least.